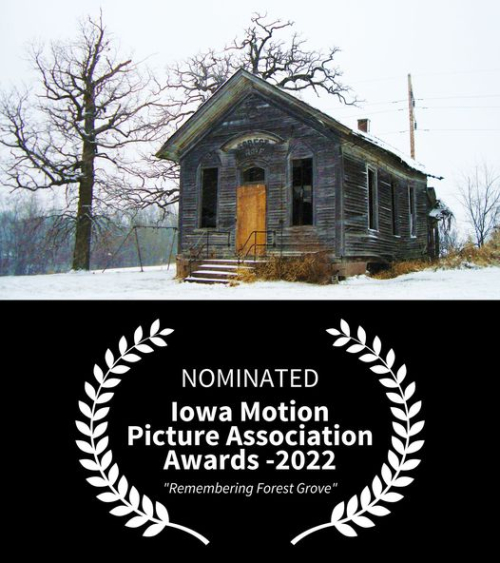 We are pleased to announce that "Remembering Forest Grove" has been nominated for an Iowa Motion Picture Award! The short documentary was produced by Kelly and Tammy Rundle of Fourth Wall Films for Forest Grove School Preservation and is only available to view in the schoolhouse museum located at 24040 Forest Grove Dr, Bettendorf, Iowa. Visit https://forestgroveschool.org/ for museum hours and more information.

The Iowa Motion Picture Awards recognize outstanding creative and technical achievement in Iowa’s moving image production industry, in all its forms -- in 22 program categories and 25 craft categories. Nominated entries and winners will be recognized at the Iowa Motion Picture Awards Gala Ceremony on May 14 at The Bridgeview Center in Ottumwa, Iowa. Visit IMPA for more details.

The Rundles are currently in post-production on a feature length documentary, Resurrecting Forest Grove, which cinematically tells the dramatic true story behind the seemingly-impossible task of restoring the vintage one-room school to its 1920s appearance. In 2012, a small group of preservationists stood before the hollowed-out shell of the unique and historic 1873 Forest Grove School No. 5. In the shadow of the gray, windowless, sagging structure they decided it could, and should, be saved. Footage and interviews gathered over a seven-year period depict the problems they faced and the solutions they employed as they attempted to bring this rural icon back to life. The surprises and successes of this challenging restoration project are intercut with a vivid historical portrait of the 'Roaring 20s' in rural America.

Resurrecting Forest Grove is partially funded by a grant from Humanities Iowa, and the The National Endowment for the Humanities. The fiscal sponsor for the documentary project is Truth First Film Alliance, Inc.

Click HERE to learn how to contribute to the documentary film project and add your name to the credits.

Resurrecting Forest Grove is slated for release in 2023 for the 150th anniversary of the school!

Watch the brief video below. Then CLICK HERE for details on how you can contribute to the documentary project &

have your donation DOUBLED by a special MYSTERY CASH MATCH.

Thank you very much for your support!