Bettendorf school rescue complete: 'You folks did this' 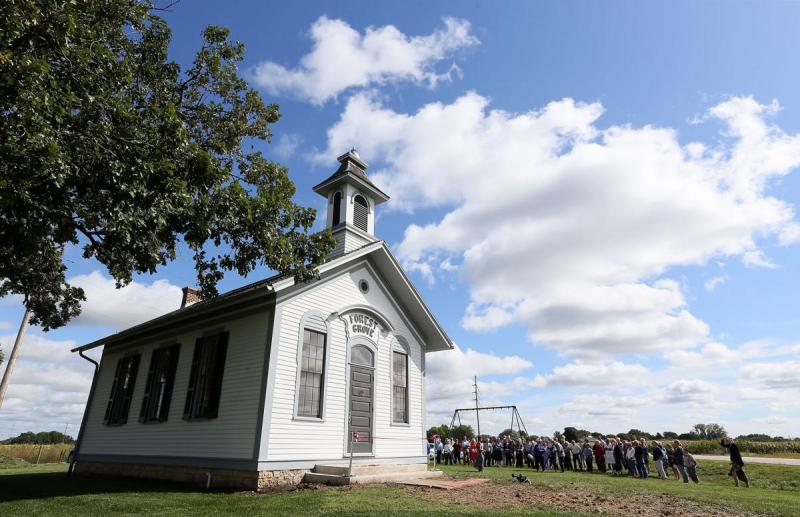 An unlikely long shot paid off Friday when supporters of the once-collapsing Forest Grove School in Bettendorf snipped the ribbon at the entry of the restored, 1873 one-room country school.

Peals from the school's original bell rang out across the countryside as Sharon Andresen, the Bettendorf woman who spearheaded the seven-year restoration effort, told the crowd of about 70 that although she is "often the face and voice of the project," the community should know that "you folks did this."

About $225,000 has been spent, with untold amounts of in-kind donations of time and materials, Andresen said. Money was raised through grants; the sale of historic tax credits; direct "asks"; Birdies for Charity, the fund-raising arm of the John Deere Classic golf tournament; trivia nights, and car washes.

Going forward, the building that was restored to the 1923 time period will be used as a museum/interpretive center, telling the story of one-room country schools and the farm life that surrounded them. At one time, Iowa was dotted with about 13,000 one-room country schools; they closed in the 1950s after state-ordered consolidation.

Tammy & Kelly Rundle of Fourth Wall Films, producers of the new documentary feature film Resurrecting Forest Grove, have been documenting the restoration of Forest Grove School No. 5 since work began on the schoolhouse seven years ago. The film project is in the production phase and a fundraising campaign is underway to raise matching funds for a grant the project received from Humanities Iowa. Click HERE to learn more about the film project and how YOU can help!