It all Began in 1946 - My Ford 9N Tractor Restoration Journey 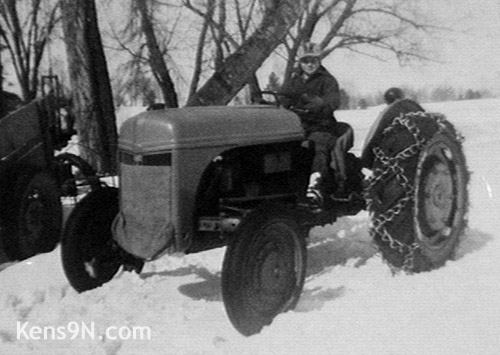 Ken onboard his father's 1944 Ford 2N tractor on a typical Wisconsin winter day.

Why would anyone want to restore an old Ford tractor?

My tractor story really begins on an early Fall day in 1946.  I was nine years old.

I lived with my parents on a small dairy farm near New Auburn, Wisconsin.  My grandparents lived on a nearby farm.  We hadn't been there long, and didn't even have a refrigerator.  Just an icebox.

I had wore out a small tricycle and now had a larger one.  My bicycle came along later.  With a shortage of metal during World War II we had to get on a waiting list to purchase one.  When someone ahead of us chose not to buy, my parents paid $45.00 for a Monarch with a carrier on the back.

What was I talking about?  The tractor.

I walked home from school one day in 1946, and as I stepped into our yard I saw a Ford tractor.  At first I thought it was the neighbor's Ford Ferguson.  Then my father told me he purchased it at an auction.

Even after the war, price controls were in effect and there were limits on prices at auction sales.  No bidding was allowed on farm equipment, at least not on farm tractors.  My dad had put his name in a hat, so to speak, and it was drawn.  He bought the tractor for $600.00.  He also got a choice of attachments with it at a set price.  He chose a two-row cultivator.  The next spring he bought a two-bottom plow, 14" per bottom.

My dad farmed the rest of his life with that 1944 Ford 2N tractor as his primary tractor.  He also had a 10-20 McCormick Deering and later a Farmall Model B, but most of the farm work was done by the Ford with its many 3-point hitch attachments: a two row cultivator; a two row corn planter; and a cordwood saw for firewood.

He also had pull-behind implements such as a spring tooth drag harrow, two wheel trailer, hay wagon, manure spreader, cornbinder, haywagon with a hay loader behind, and even a two bunk sleigh to haul wood out of the timber for firewood.  We would cut down trees with a two man crosscut saw and haul them up into the yard to be cut up with the cordwood saw.

I've always wanted a tractor like the 1944 2N I grew up with, which is still in use.  My brother owns and uses it on his property.

Next time I'll tell you about the tractor I almost bought...but didn't.