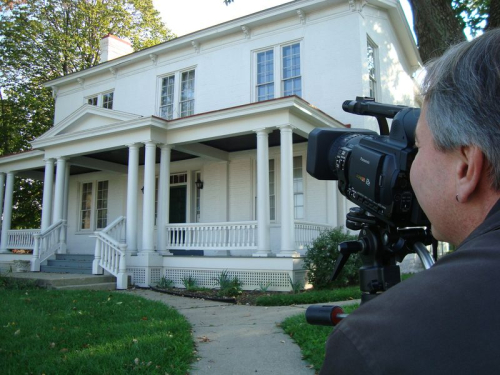 Kelly Rundle films at the Harriet Beecher Stowe House during the Rundles' first visit to the historic site in Cincinnati, Ohio.

Cincinnati will be the location for more production on the new documentary Harriet Beecher Stowe: Her Transformative Ohio Years (working title).  Filming interviews with several key scholars on the project will take place during the weekend of March 23-25th, with additional filming for the documentary slated in Cincinnati in June.

Emmy® nominated filmmakers Kelly and Tammy Rundle will also appear with their new narrative film Sons & Daughters of Thunder at the Garfield Theatre, 719 Race Street in downtown Cincinnati on Saturday, March 23rd.  Several of the film's actors will join the Rundles for a "Talkback" following the film.  The event is sponsored by Friends of the Harriet Beecher Stowe House.  Advance tickets are recommended and can be purchased online at http://www.cincyworldcinema.org/.  The docudrama tells the true story of the 1834 Cincinnati, Ohio Lane Theological Seminary anti-slavery debates.  The controversial meetings, led by abolitionist and firebrand Theodore Weld (played by acclaimed stage actor Thomas Alan Taylor), were the first to publicly discuss the end of slavery in America.  The meetings angered Cincinnati residents and Lane Seminary officials, who promptly slapped a gag order on the entire student body.  This action was followed by a freedom of speech protest and mass exodus of Lane students to Oberlin College.  A young Harriet Beecher’s (played by acclaimed stage actress Jess Taylor) exposure to the debates and Weld's continuing work to free the slaves sparked a flame that led her to write her magnum opus Uncle Tom's Cabin.  Sons & Daughters of Thunder is based on a play by Earlene Hawley and Curtis Heeter.

The poster art for Sons & Daughters of Thunder, premiering in Cincinnati on March 23 at the Garfield Theatre.