On this 23rd day of November we honor abolitionist and Lane rebel Theodore Weld's 215th birthday by announcing the Cincinnati Premiere of Sons & Daughters of Thunder is set for Saturday, March 23, 2019 at the downtown Garfield Theatre, 719 Race Street.  The docudrama, produced by Mid-America Emmy-nominated filmmakers Kelly & Tammy Rundle of Fourth Wall Films, and Kent Hawley, will screen at 4 p.m. and 7 p.m.  A Q&A with the filmmakers and others will follow the movie.

This special Cincinnati premiere event is sponsored by the Friends of the Harriet Beecher Stowe House. 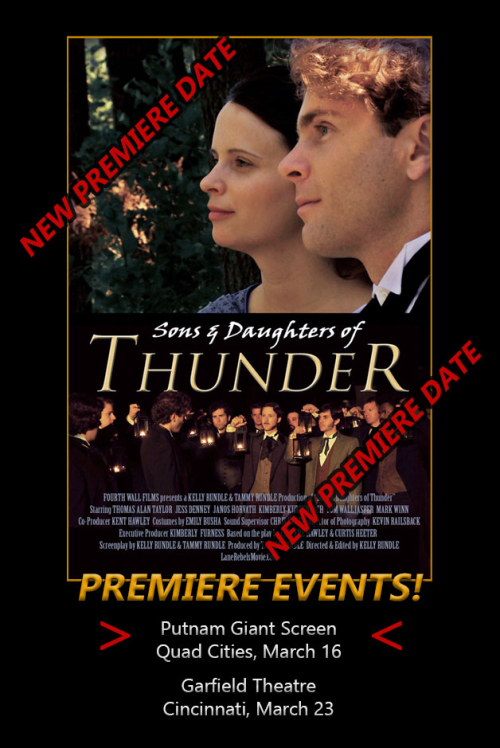 "We are very excited to show Sons & Daughters of Thunder in the city where the true story took place 185 years ago," said producer Tammy Rundle.  "Attendees of the film premiere will also have the opportunity to visit historic sites in Cincinnati with connections to the story, including the Harriet Beecher Stowe House, the last remaining structure on what was Lane Theological Seminary grounds where abolitionist Theodore Weld and his 'Lane Rebels' made history with the first public discussions of the abolition of slavery."

The Rundles are also working on a new documentary entitled “Harriet Beecher Stowe: Her Transformative Ohio Years.”  Friends of the Harriet Beecher Stowe House is the fiscal sponsor on the project.  Beecher Stowe (1811-1896) was an author best known for her popular anti-slavery novel, Uncle Tom’s Cabin, who was born and died in Connecticut, but lived in Cincinnati between 1832 and 1850.

"We became aware of Harriet's life in Cincinnati because of our work on Sons & Daughters of Thunder," said director Kelly Rundle.  "We thought, 'Here is an important part of Harriet's life that has not been explored in a documentary.'  We became interested in how the life-changing experiences in Cincinnati contributed to her best-selling novel Uncle Tom’s Cabin."
Based on a play by Earlene Hawley and Curtis Heeter, Sons & Daughters of Thunder tells the unforgettable true story of the beginning of the end of slavery in America. In 1834, if polite discussions about abolishing slavery were considered inappropriate among Americans in Northern states, then eighteen days of public student-sponsored debates on the divisive subject at Lane Seminary in Cincinnati, Ohio (a border community) were scandalous. Organized by Theodore Weld, one of the architects of the abolitionist movement, the shocking oratory sparked intense controversy and awakened a young Harriet Beecher (Stowe) to the realities of slavery.

Fourth Wall Films is an award-winning and Regional Emmy® nominated independent film and video production company formerly located in Los Angeles, and now based in the Quad Cities.