In 1824, during the twilight of Native American dominion, two conflicted Ioway leaders met with William Clark (of Lewis and Clark) to sign a momentous treaty.  White Cloud (Mahaska) saw cooperation as survival for his people, while Great Walker (Moanahonga) regretted the loss of their ancestral homeland.  This pivotal moment led both men to different tragic destinies in their battle with epic change.

Ioway Elders join historians and archaeologists to tell the dramatic and true story of the small tribe that once claimed the territory between the Missouri and Mississippi Rivers from Pipestone, Minnesota to St. Louis.  What was a quest for survival in the past, has become a struggle to retain a unique Native American culture and language in the present. 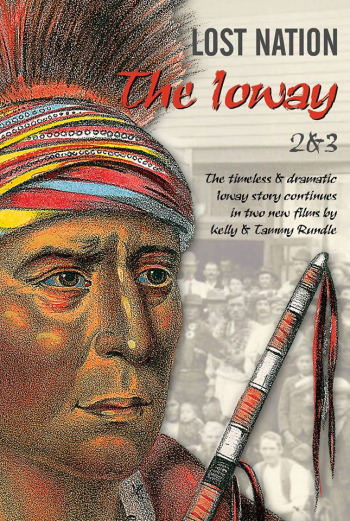 Part 2 - When the Ioway were forcibly removed from their ancestral homelands to a reservation bordering Kansas and Nebraska, Ioway leader White Cloud (the Younger) believed the move would ensure survival for his people. But broken treaties, land loss, the end of communal living, and attempts to diminsh their unique language and culture led to the establishment of a second Ioway Tribe and their own "trail of tears."

Part 3 - As two separate Nations, the Ioway entered the 20th century amid American Indian policies aimed at Native American assimilation. From the Ghost Dance to the American Indian Movement, the Ioway experienced cultural disintegration and rebirth. Successful land claims in the 1970s propelled both tribes toward greater self-determination and a revival of time-honored Native traditions.