| Country School: One Room - One Nation 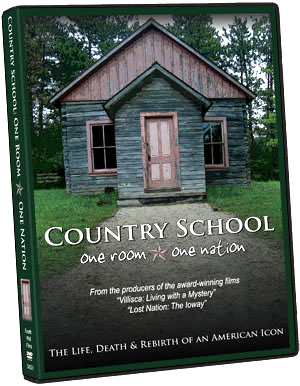 Country schools took rough-hewn pioneers and multilingual immigrants and transformed them into a literate and patriotic new nation. Whether personally, or through a parent or grandparent, the country school as an American architectural icon, is as imprinted on our perception of the nation’s early history as the log cabin and the general store. Stories told by former teachers and students are often nostalgic, but they are also dramatic, humorous, and heart-wrenching.

Kelly & Tammy Rundle's Country School: One Room - One Nation provides a never-before-seen perspective on one-room schools in the Upper Midwest. This visually stunning film features a unique country school designed by Frank Lloyd Wright along with dozens of more traditional structures of brick, stone, or wood - in all stages of restoration or decay - in picturesque rural areas of Iowa, Kansas, Wisconsin, Illinois, Minnesota, Missouri, and Nebraska. Shot in the midst of all four seasons, Country School features interviews with a who's who of one-room school scholars, including authors Bill Samuelson, Jerry Apps, Dorothy Schwieder, Mark Dewalt, Vera Hurst, Frank Yoder, and Bill Sherman, as well as former country school teachers and students.

From the first schools in new states to the demise of their widespread use in the 1950s and 1960s, Country School: One Room - One Nation takes viewers "back to school" for a dramatic new look  at the lasting impact of America's one-room schools.